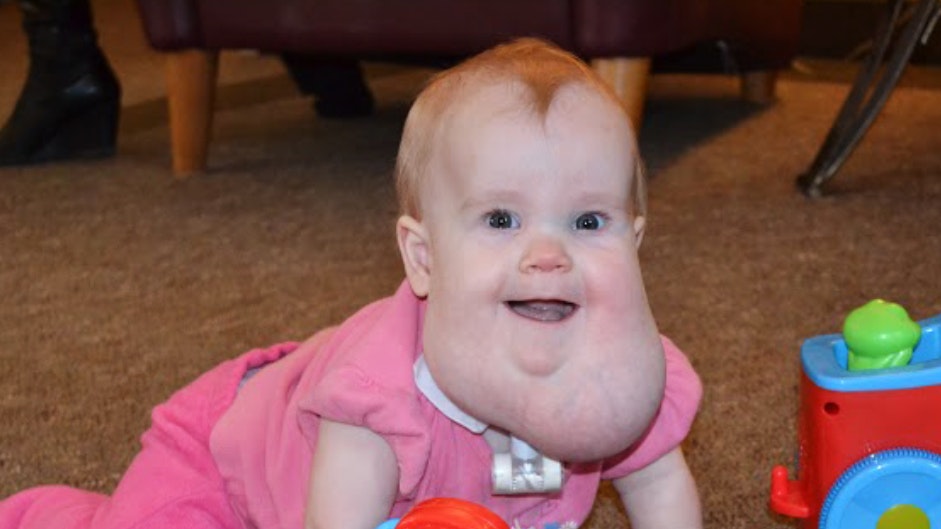 "There’s no amount of money in the world that equals what the Ronald McDonald House means to me."

During last year's holiday season, Melanie Finnimore couldn't contain her excitement. She was five months pregnant with her first child.

On December 24th, 2014 Melanie went for a routine ultrasound, only to be told the devastating news. A large cyst was found in her baby's neck region, so Melanie quickly travelled from her hometown of Portage la Prairie, Manitoba to receive a fetal assessment in Winnipeg's HSC Children’s Hospital.

The cyst was growing in the front of her unborn baby's neck due to a rare condition known as cystic hygroma. This condition, generally seen in Manitoba every three to six years, involves large and small cyst-like cavities containing lymph, a watery fluid. Sadly, as time passed, the cysts in her developing baby's neck continued to grow in size and complexity.

On April 7, 2015 Melanie counted 17 doctors and nurses in the delivery room with her. As Melanie's baby was born, the large neck growth started to dangerously bleed, but the delivery ended in success. Melanie was delighted to have a new baby girl.

Melanie decided to name her daughter Joy for a number of reasons. “She brought so much joy into my life. People also call her a “joy to the world”, and she definitely lives up to her name. She gives me a reason to get out of bed in the morning”, says Melanie, slowly rocking Joy in her arms.

Melanie needed to be close with Joy while she received critical hospital treatment, but didn't know where she would stay. She was told of Ronald McDonald House Charities® Manitoba, the only organization of its kind in Manitoba that provides comforting services, support programs, and accommodations to rural families with sick or seriously injured children receiving hospital care nearby. Melanie has stayed at the House since Joy was born.

As Joy was closely monitored by doctors, her condition turned out to be more complicated than expected. She stayed in HSC's Neonatal Intensive Care Unit for three weeks, but her neck growth grew larger every day, reaching below her tiny belly. Three weeks after Joy was born, she received her first operation to reduce the size of the growth, but it didn’t end there.

During Joy's fourth week of life, she was fitted with a breathing and feeding tube so she could be safely fed and breathe on her own. If Joy’s breathing tube accidentally falls out, her airways immediately close up making her current situation so critical. 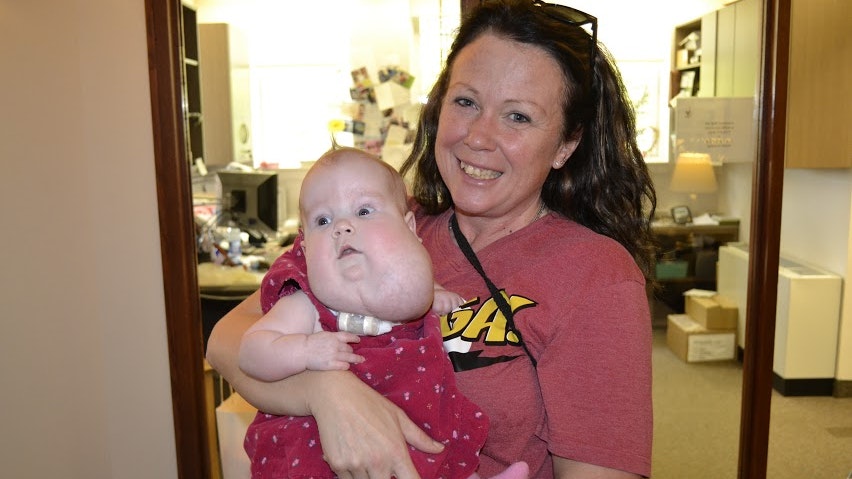 “Normally, they would have started us out with a two hour pass, but because we are close enough, and in the trusted environment of Ronald McDonald House, they allow us to spend up to 10 hours a time together"

Melanie has stayed at Ronald McDonald House for the past seven months and continues to be a guest. She is grateful to have the House as a way to escape hospital life. She believes it’s given Joy a sense of normalcy and is essential to her healing process. “There’s no amount of money in the world that equals what this place means to me. While staying here Joy is sleeping better, eating better...this place has an atmosphere that's full of love and Joy senses that”, describes Melanie.

Special medical procedures helped temporarily improve Joy's condition, but her cystic hygroma continues to grow and spread from Joy's eye sockets, all the way through her face, down her neck, and are now starting to multiply around her lungs.

But Melanie is hopeful. “We don’t focus on that. I’m just so thankful for this place. Ronald McDonald House thinks of all the details you’re not prepared for in the case of an emergency”, says Melanie as Joy looks up and smiles at her. “It’s really nice to have a washer and dryer, a kitchen for cooking, special programs providing home cooked meals, relaxation sessions, a private room, and common areas where we can relate to other families.”

Melanie says Joy needs at least 20 more operations in her future. Ronald McDonald House will always be there for the Finnimore family when they need a place to stay. 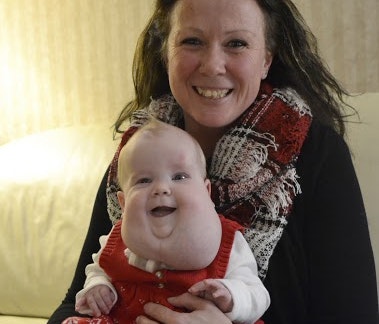 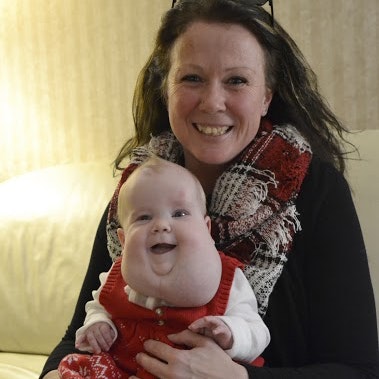 Help keep families together while their sick child is treated at a nearby hospital. 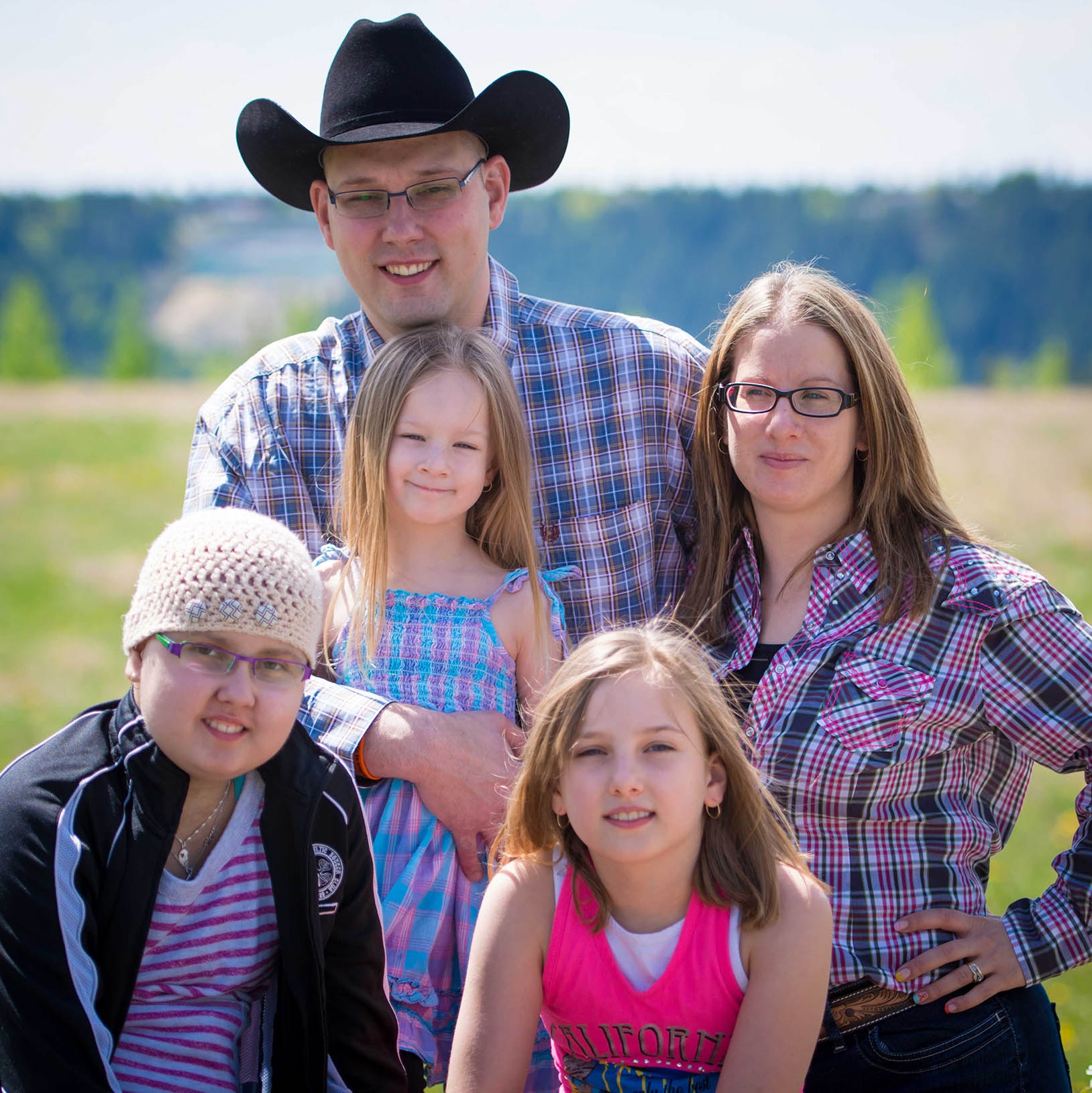